Tobacco risk awareness is on the rise, but we don’t believe that the issue is posed as urgent enough. Most people speak about second-hand smoking, others mention cigarette manufacturing, but do we really know all the ways in which smoking harms the environment? It’s time to find out.

Cigarettes are made from tobacco, and tobacco is a plant; consequently, it has to grow somewhere. Acres of century-old forests are cut down to make room for tobacco plantations. A peasant from Tanzania called Emmanuel Mihambo witnessed the process with his own eyes: his father started growing tobacco in the 1980-s on only 10 acres of land. The fields have since taken the territory of a large local forest, which is now gone completely, together with its numerous plant species and wildlife inhabitants. And for areas where people rely on foraging and hunting as a means of sustenance, the problem is even more pressing.

Another reason for the ongoing process of deforestation is the need for firewood. Huge fires are burnt in order to dry tobacco leaves before rolling them into cigarettes. And this wood does not appear out of thin air either. 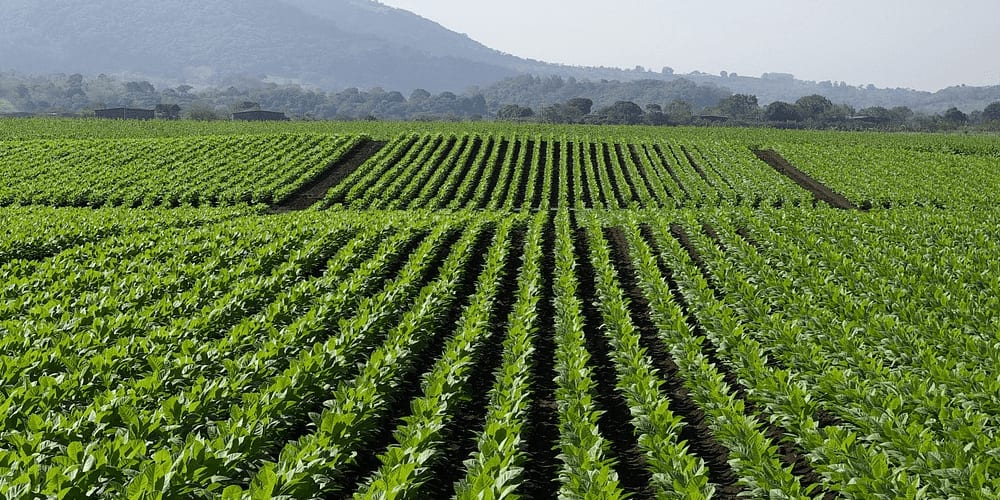 Before tobacco reaches factories, it has to be grown and cured. Industrial-scale fields impoverish the soil by using up most of its nutrients and minerals. Moreover, strong pesticides and dangerous chemicals are used to ensure rich crops. But even before the tobacco is planted, armies of machinery come to prepare the fields; then other machines work on a regular basis to give tobacco the care it needs. Then some more machines come to harvest the crops and transport them to curing facilities, where special equipment is ... - we won't even go into describing how big the emission of gases and chemicals by all the machinery involved in the process is! But we can point at some of the main culprits - tobacco industry uses a chemical known as Aldicarb, which is extremely toxic both to people and animals. Production waste also includes chlorpyrifos, 1-, 3-dichloropropene, imidacloprid, dithane DF, and methyl bromide, and these chemicals are no less harmful to people, flora, and fauna. 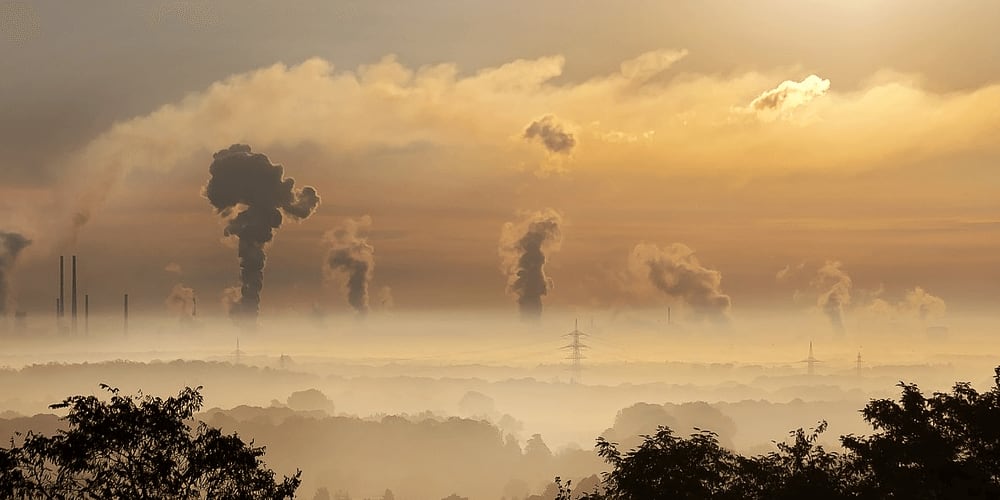 After the tobacco is processed, it needs to be rolled and packed, and this is where new types of machinery come into the scene. The process requires some more space, energy, and chemicals. Finally, store-ready cigarettes are transported to stores, and the process of transportation leaves a very distinct carbon footprint as well.

In the 1990-s, the tobacco industry produced 2.5 million tons of industrial waste plus 200 thousand tons of chemical waste annually. The figure has only grown bigger since.

A single cigarette may not do too much harm to a single person. But every year, cigarette smokers release about 5.7 million tons of methane and 2.9 million tons of carbon dioxide into the atmosphere, thus directly polluting the air. We don't believe that individual smokers have ever thought how big an impact their collective "effort" produces upon the environment. 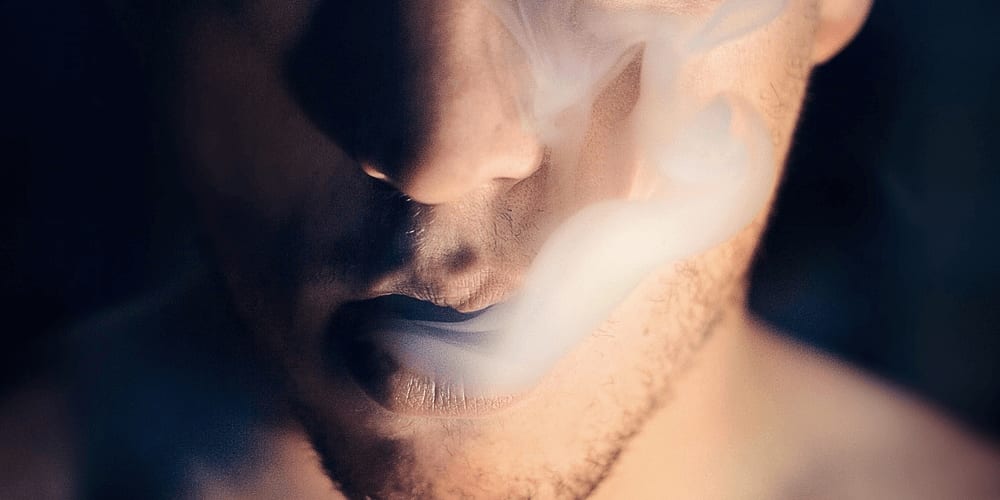 A cigarette butt is a tiny thing that many smokers just flick away without even thinking. But again, the collective "effort" of all smokers around the world produces an enormous impact on the environment. In fact, 20 years ago the Ocean Conservancy carried out research that revealed that cigarette butts are one of the most commonly littered items. Unfortunately, the results are still applicable to the environmental situation.

First, cigarette butts are not biodegradable. Tobacco is, but the filters are made from a sort of plastic known as cellulose acetate, which only degrades after continuous exposure UV rays. As you can imagine, this is not a rapid process - to be more exact, it takes 10 years for a single cigarette butt to decompose.

Cigarette butts often are scattered along the shoreline, and water carries them further. Even if not scattered, cigarette butts can still find their way into the ground via trash and end up poisoning groundwaters. 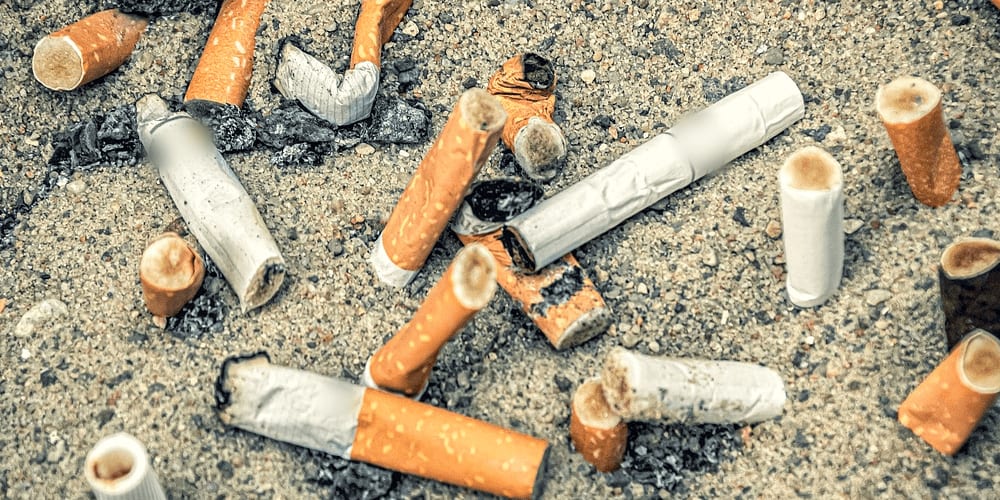 Harm to Flora and Fauna

Cigarette butts not only look gross, but they are also extremely dangerous: 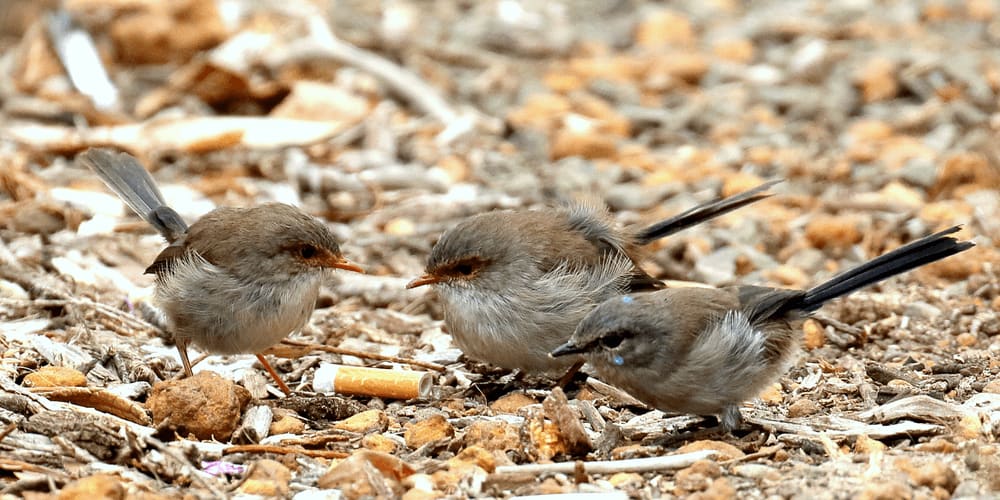 Small children and babies who prefer to explore the environment by putting new things in their month can ingest discarded cigarette butts. Nicotine poisoning in children manifests itself through paleness, nausea, gagging, and vomiting, higher lower blood pressure, lethargy, and many other symptoms.

Smoking is a frequent cause of forest and home fires. Every year, about 17,000 people are killed in fires caused by discarded cigarette butts or lighters. Smoking-related fires also inflict about $27 billion of property damage annually. In 1987, a massive forest fire swept through a region in China killing 300 people, destroying 3.2 million acres of forest, leaving 5, 000 people and countless animals inhabiting the burnt forest homeless. Do we need to mention that the fire had started with a tossed cigarette butt? 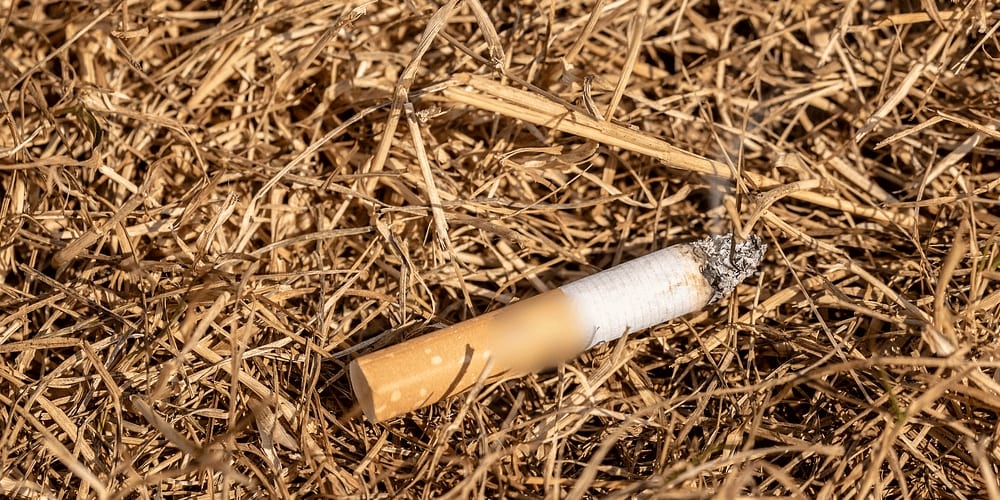 The tobacco industry cannot possibly take any reasonable effort to diminish the harmful influence. Cigarette manufacturers may have good intentions but their actions make no big difference if any at all. It's up to the clients they serve - cigarette smokers around the world - to cut environment risks.

Be good to the environment - choose to quit smoking!